While Far Cry 6’s previous DLCs may have shone the spotlight on previous villains from the series, the latest expansion returns to familiar territory in a different way: by jumping the shark completely. Lost Between Worlds puts you back in the shoes of Dani Rojas and is all about an alien entity named Fai who crash lands in Yara, creating a myriad of time gaps and portals to other dimensions. What follows is a web of interconnected semi-roguelite levels that you can play freely in any order you like. It’s a really nice way to end Dani’s story, which I happily plowed through all six hours in one day, even though it essentially felt like a watered-down version of the main game.

Similar to how Far Cry 3 brought us the neon-soaked Blood Dragon, Far Cry 4 gave us a fabulous valley of Yetis, and Far Cry 5 dropped us off on Mars, Lost Between Worlds isn’t afraid to close Far Cry 6 with word kinda weird. Fai’s arrival scattered five shards in different dimensions, and it needs your help to find those shards and reassemble his ship to get off the planet. Fortunately, the mere process of collecting shards should also save the world from ending – handy, right? The best way I found to have fun with Lost Between Worlds was to just immediately give in to a suspension of disbelief. There is no Real explanation for an alien craft that crashed into Yara and the sooner I realized that didn’t matter, the sooner I had fun blasting away at the DLC’s colorful, crystalline enemies.

What we said about Far Cry 6

Far Cry 6 is one of the most fun I’ve had with this series in nearly a decade. The cast puts in a strong performance in a fun story, even if it’s also a fairly predictable one that doesn’t always deliver the bigger swings it tries to take. And despite some faltering new inventory mechanics and a handful of bizarre design choices, the creative weaponry means it’s never felt better to take down an outpost, loot a convoy or even just take a ride with a friend. – Jon Ryan, October 6, 2021

Collecting shards means venturing through portals in destabilized twists in the real world called rifts. Each canyon looks like a cool, bizarrero world version of Yara and is essentially a self-contained level with a unique quality that presents a new challenge. For example, one chasm suffers from periodic lightning strikes, another has a slowly descending spiral of doom from the clouds, and another is completely pitch black except for the rosy glow of the precious shard.

As you venture through chasms, you can also collect sparkling “Glint” fragments. If you die, you can use Glint to revive at the start of that canyon if you’ve had enough – otherwise death means restarting your entire run back to the start of the canyon web with Fai. That’s a welcome relief for anyone who isn’t into a more traditional roguelike formula, but I actually didn’t die much during Lost Between Worlds, rolling credits with a whopping 1,000 Glint saved.

Once you reach the end of a chasm, you must choose between two portals (red or blue, of course) to progress. The portals are simply gateways to your choice of two other random rifts, and whichever they lead to remain the same for the entire run. That gives a nice sense of variety to mix things up the first time you go through a new portal, but also means you know where it connects if you need to go through a chasm later on. Your map even shows you which portal connects to which canyon once it’s unlocked, so you don’t have to guess if you’ve visited each canyon at least once.

After each shard you collect, Fai gives you a new piece of equipment to speed up your journey through the canyon. For example, after you return the first shard, she will give you a C4-style bomb that can be used to open shortcuts on subsequent visits to the rift. Other gadgets include a grappling hook for climbing walls to skip sections and a key to open previously locked doors that usually contain loot. This is a great progression structure as it drastically cuts down on replay if you don’t have to replay entire rifts every time you visit.

Aside from that handful of permanent equipment upgrades, any weapons and gadgets you’ve collected along the way will be lost if you collect a shard or die trying. Since there are only a handful of weapons to find, I like this feature because it forces you to adapt to what’s available instead of picking a favorite weapon and never switching. That, in turn, ensures that each canyon remains entertaining even if you visit it for the second or third time.

Since all the gorges intersect and connect in different ways, you don’t even have to visit the same gorge more than once or twice if you don’t want to. For example, I absolutely hated the canyon that requires you to swim around underwater, floating you from bubble to bubble while trying not to drown. It was just annoying and annoying, like most water levels. So I’ve just avoided it on all my other shard collecting trips. I greatly prefer this style of premeditated variation to the procedural generation or random fraction selection that Ubisoft could have opted for here, allowing me to play any scenario in the order I chose.

The new color-coded enemies don’t really add much to combat.

The other big twist that Lost Between Worlds introduces is “chromatic combat.” All enemies in this DLC are crystallized humanoid creatures that are either pure blue or pure red. To damage one, you have to shoot them with their matching color by changing your own bullet color on the fly. (Though, for some odd reason, the default key combination on PC for switching colors is ‘L’, which was unpleasantly inconvenient until I switched it to my mouse’s thumb button.)

Unfortunately, this color-changing idea doesn’t really add much, as enemies always seem to spawn in the same places every time you visit a canyon, and trading is as simple as a button press. Aside from amplifying the alien imagery on display, it’s mostly pointless. That’s especially true since there are only a handful of true enemy types among your standard assault rifle users, snipers, melee rushers, and shielded machine gunners. I would have preferred better encounter design or more creative enemy AI than adding an unnecessary color-changing layer to combat. 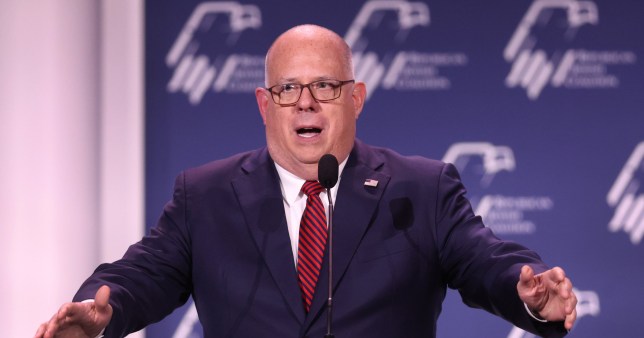