‘Did he forget this isn’t rugby?’: New York Giants Scottish punter Jamie Gillan mocked by fans for DROPKICKING the ball past the Eagles – and it even left officials confused as to what to do next!

New York Giants punter Jamie Gillan caused a moment of chaos when he dropped the ball before kicking it away in Sunday’s game against the Philadelphia Eagles.

Gillan received the ball and went far upfield when he appeared to drop it amid the wet and rainy conditions at MetLife Stadium.

The ball bounced before making contact and as it landed the players themselves seemed unclear about what followed next. So are the officials. 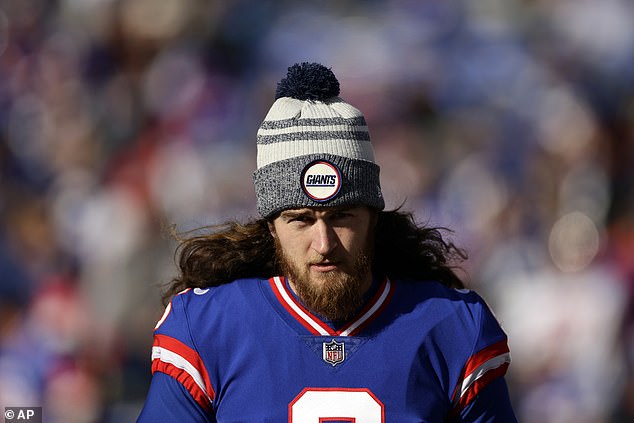 They had to huddle together and deliberate before finally awarding the ball to the Eagles for an illegal kick and a 10-yard penalty to the Giants.

Gillan’s punt formed to wrap up the whole game for the Giants – they trailed the Eagles 21-7 at halftime.

Unsurprisingly, fans reacted ruthlessly to Gillan’s mistake. Born in Scotland, Gillan played rugby as a child – a sport where players are allowed to drop kick the ball.

He only started playing football when he moved to the US at the age of 16 and was nicknamed ‘the Scottish hammer’.

One fan responded to the clip on Twitter by saying, “Did he do this on purpose? I don’t know if the ball slipped or if he forgot this isn’t rugby.’ 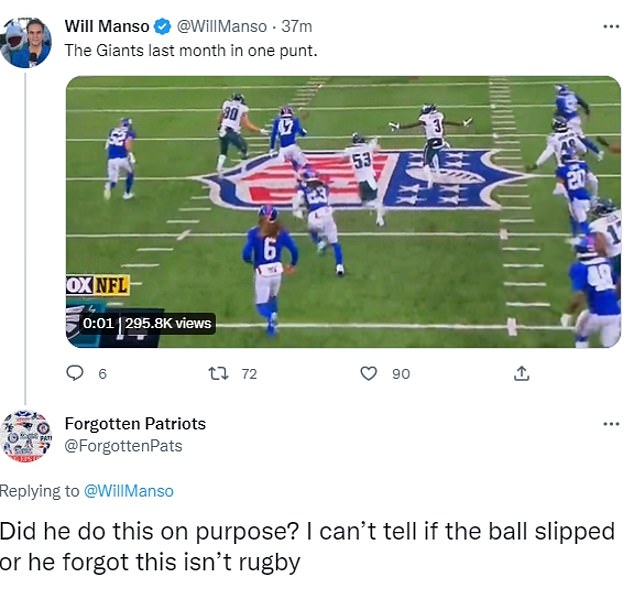 Another fan wrote: “Jamie Gillan drops the ball just short of the point… The wheels are completely off now.”

The Giants had sympathy from a rival supporter, who wrote, “That #JamieGillan kick was the most painful thing I’ve ever seen happen in an NFL game and I’m a Colts fan…”

The Giants went into Sunday’s game with a 7-4 record and finished third in the NFC East standings.